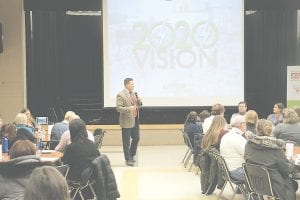 LAPEER — The 2012 reconfiguration of Lapeer Community Schools that culminated in the merger of Lapeer East and Lapeer West High Schools, creating what students know today as Lapeer High School, went from conception to reality in 18 months. This time around, the district and the community will have a little more time than that.

Eyeing a date ahead of the 2022-2013 school year, LCS Superintendent Matt Wandrie told the 50 Board of Education members, district administrators and members of the public that gathered for the first of two focus groups Monday night that the “2020 Vision” restructure plan, still in its nascency, is definitely a work in progress. “The earliest any of this is going to go into effect isn’t until 2022,” he said. “We have time to make it exactly the way we want it, to mull it over and get it right.”

The district’s focus group at Zemmer on Monday is one of two planned for November. Later in the month, on Nov. 28, Wandrie expects to do it all over again at Rolland- Warner, and the message at both will be one of collaboration. Wandrie was clear: the current plans to ‘right-size’ the district, at this juncture, are just that — plans. “This is our best thinking right now,” he said. “We’re throwing it out there so you can tear it apart.”

Attendees at the focus group were asked to weigh in on the current proposals, two options that would see the district constrict in size to five full-time facilities. In both plans, Early 5/Kindergarten, Early Childhood Special Education and Kids and Co. would be housed at Schickler, Zemmer would be the site for early elementary grades and Rolland-Warner would house upper elementary. The current high school on the site of Lapeer East would become the district’s middle school and high schoolers would call the current site at Lapeer West home.

The difference between the two plans is in the details. One plan, dubbed “Option One,” would see third grade split between Zemmer and Rolland-Warner, with half the grade in each building, while “Option Two” suggested locating the district’s fifth-graders at the middle school level with sixth-eighth grade. In both plans, Schickler would house an average of 400-500 students, while Zemmer and Rolland-Warner would be home to 600-800 students. The east campus would house 900- 1,200 students and the Lapeer West site, as the district’s new high school, would be home to 1,300-1,500 students.

Wandrie said both plans have “definite pros and definite cons” and it’s up to the district’s administration, employees and families to decide. Both plans, he said, focus on four main goals — structural changes and facility improvements to fit a 21st century model of education, continued expansion of academic opportunities for students, continued improvement to security and enhance support of the district through public-private partnerships.

“This will not be your one and only opportunity for feedback,” Wandrie said. “It’s truly a work in progress, it’s even changed since the original focus panels.” Wandrie pointed out that in the original proposal shared less than a month ago, Turrill Elementary was retained as a stand-alone year-round facility, a suggestion he said was pretty soundly rejected via feedback he and the district have gotten. “That feedback really is going to make a difference and impact,” he said. “We can’t just walk into a room and say ‘oh, here’s a new plan, what do you think?’

Wandrie said the goal with 2020 Vision is to involve as many people, organizations and district families as possible every step of the process to ensure the current

‘right-sizing’ will be as successful as the last. “The Lapeer High School consolidation has become a model for consolidation statewide and has saved over $1,000,000 per year in operational costs,” Wandrie said. “Lapeer has become very accustomed to the fact that we do more with less.”

Currently, said Wandrie, Lapeer Community Schools is in the top 9 percent statewide in efficiency in business administration, operations and maintenance according to a Michigan Dept. of Education bulletin issued this month, out of over 800 districts. The district is also in the top 29 percent in the state for investment in instructional support.

The driving force behind the need to constrict the district is one that every district in Michigan is experiencing — population. Michigan families are simply not having children, and as a result, the number of school-aged children has dropped precipitously in the last decade, with a marked drop during and immediately after the Great Recession in 2008. In 2007, there were 12 buildings dedicated to elementary aged students in Lapeer Community Schools, while today, there are five. With the proposal heard by focus group attendees on Monday, that number would fall to three.

Lapeer Community Schools has seen a 28 percent drop in enrollment since 2008, comparable, but more severe, than statewide trends. “The gap is considerable (between Lapeer and the state) so the significant impact on Lapeer is amplified over our neighbors,” Wandrie said. “More kids equal more money, and less kids equal less money, it’s a very simple equation.”

According to Wandrie, because of the current enrollment trends, the district sees it as a necessity to begin the conversation about further restructure so the problems associated with a shrinking population don’t take anyone off-guard. “It’d be a lot easier as a leader in this district to say that everything’s great, we don’t need to have these meetings, but that’s not the case,” he said. “It’s not Matt Wandrie’s plan, it’s our plan.”

And to pull that plan off, the residents in the district will be asked to step up. The district expects to issue a bond proposal that district residents will vote on in 2019, and the goal, said Wandrie, is to convince a historically frugal tax base to support the plan. “We’ve passed one bond in 40 years in this district, and I think that might be because of a variety of reasons, poor messaging, us not listening to the voters, and the demographics. It’s a challenge that we have to confront,” he said. “Lapeer is not coming at you every year asking for money.” In 2007, the district passed a bond generating $56.8 million.

At this date, there are three bond options that the district, with the help of the community, will hone leading up to the November 2019 vote. Voters will potentially chose to approve a $75 million, $100 million or $125 million bond amount. Each would be over 24 years and three-and-a-half months and equate to an average annual cost to homeowners from $109-263 per year. Wandrie said the current thought is favoring the middle amount — $100 million over 24 years, an increase in the debt levy of 2.38 totaling $178 per year as annual cost to the average homeowner. “If we could pull off everything we want to do, at a cost of only $14.83 per month, wouldn’t you want to do that?” Wandrie said.

Wandrie addressed a third restructure option as well, though it’s not one he or anyone with the district would suggest. “Can we do nothing, and is that an option? Of course,” he said. “But it’s not financially sound, and nobody’s coming here to figure it out for us.” Wandrie said to be proactive in planning for the future sends the right message to the district’s students. “(Planning) is good for the kids, and not doing anything is not what we’re trying to teach to our students, to be self-reliant and leaders in the community,” he said.

Both current options feature the construction of a community center on the campus at Lapeer West that the district envisions as a place where community partners, businesses and nonprofits can offer their services conveniently to Lapeer Community Schools students, staff and their families. Wandrie suggested a number of businesses and organizations that could make use of such a space. “We saw that campus on the corner of Millville and Oregon as the perfect place to bring our community together,” he said. “It’s mutually beneficial if we put shared service under one roof. We’re a community district that literally wants to be a part of the community.”

At the end of the day, said Wandrie, all the proposals and potential plans are simply to ensure that LCS students receive the best education possible. “What’s more important,” he said. “The address on the front of the building or the academic options inside? I think we all know the answer to that question.”