The extended Pearson family attended Wednesday afternoon’s meeting and posed for a photo in the meeting room of the Lapeer County Road Commission Board at its administration building on Davis Lake Road in Mayfield Township. Photos by Jeff Hogan

MAYFIELD TWP. — Lapeer County Road Commission Director Rick Pearson will retire from the road agency on Thursday, May 26 after 35 years. Wednesday afternoon, he attended his last Road Commission Board meeting at which time he was honored for his service.

Pearson’s four children, his wife, 12 grandchildren and his parents attended the meeting to witness his last meeting prior to his last day with the Road Commission on Thursday.

State Rep. Gary Howell, R-Deerfield Township, presented a proclamation on behalf of the State of Michigan to recognize his 35-year career with the Lapeer County Road Commission. Pearson started as a welder and worked his way through the ranks to become director.

“This has been a great place to work. It’s been a real pleasure. I think the organization is in the best position it has been,” said Pearson. “That’s my family (pointing to family assembled in meeting chambers), but this is my second family. I look forward to spending more time with them now. Thank you very much.” 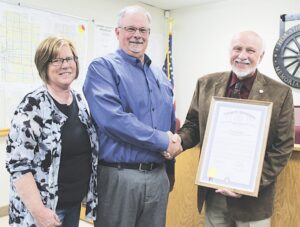 State Rep. Gary Howell presented a proclamation on behalf of the State of Michigan to honor Rick Pearson’s 35-year career with the Lapeer County Road Commission. Ginny, Rick’s wife, joined her husband for the special honor.

County highway engineer Destain Gingell was choked with emotion in his public farewell to Pearson. “It’s hard to say goodbye to a guy like you. You have been really great to work for and I’m going to miss you,” said Gingell.

Elba Township Supervisor Mike Boskee commented, “I agree that the Road Commission is in a lot better place today, and I think that’s because of your leadership.”

Rick Pearson sat behind the table in the Board room Wednesday afternoon during his last official meeting with the three-member Lapeer County Road Commission Board. Photos by Jeff Hogan 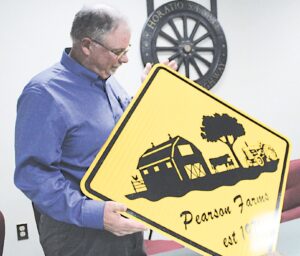