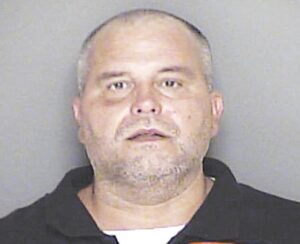 LAPEER — A former North Branch man is expected to be sentenced in August for the 2019 deaths of two Sanilac County residents. After less than two hours of deliberation on Friday, a Lapeer County jury has found Michael Dale Burns guilty of two counts of Operating While Intoxicated Causing Death and two counts of Reckless Driving Causing Death.

On Aug. 25, 2019, Brian Stamp, 53, and Rhonda Mahaffy, 51, were killed when a 2005 GMC Envoy driven by Burns crossed the center line of North Lapeer Road (M-24) and crashed nearly head-on into the 2012 Harley-Davidson motorcycle they were riding. Both victims, who were wearing helmets, were ejected from the motorcycle and struck the vehicle’s windshield before landing on the roadway. Witnesses told Lapeer County Sheriff’s Dept. deputies that Burns was driving erratically before it crossed into southbound M-24 just north of Mayfield Road in Mayfield Township. It was later reported by the Lapeer County Prosecutor’s Office that he was found to have cocaine in his system.

Stamp was a Marlette area farmer with a 16-year-old son and Mahaffy was employed at Marlette Regional Hospital and had an adult daughter. The couple had been dating two to three years.

In January 2020, the Prosecutor’s Office issued formal criminal charges. A six-count felony warrant that included the criminal charges of operating while intoxicated causing death and reckless driving causing death were issued against Burns, who surrendered at the Lapeer County Jail Jan 11, 2020. He was arraigned in the 71-A District Court in Lapeer and released from the Lapeer County Jail on bond.

A jury trial started within the 40th Circuit Court of Lapeer with Honorable Judge Nick Holowka presiding on June 14, and the trial concluded on Friday. Burns’ bond was revoked, and he was remanded into custody at the Lapeer County Jail until his sentencing in August.