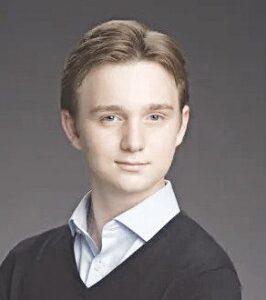 LAPEER — Today’s youth are tomorrow’s leaders, but getting them involved in local government and positions of leadership can sometimes be a challenge. Monday evening, the Lapeer City Commission heard from a bright 16-year-old junior who attends Charlevoix High School who has developed a grass-roots initiative to let the voice of youth be heard, and make a difference in their hometown communities.

About a year and half ago, Liam Dryer founded a nonprofit organization called Government for Tomorrow that gets students involved in local boards in order to represent the student and youth voice.

Dryer attended the City Commission meeting via a Zoom online connection at the invitation of Mayor Debbie Marquardt who heard good things about Dryer and the work he’s done with Government for Tomorrow as a high school student.

In many instances, whether it’s a DDA, a local planning commission, library board or a city council, the Government for Tomorrow students serve two-year terms as a non-voting member of the organizations their named to. “They’re the best idea of what the future will look like,” Dryer told the City Commission. And he should know.

In April, Dryer was appointed to the Charlevoix DDA — its youngest member ever. According to the Petoskey News- Review, Dryer joined the DDA in the affluent northwest Michigan community as a nonvoting member when he was 14 years old. Now, as a voting member, he hopes to represent his peers in decisions made about downtown Charlevoix.

“It’s incredibly exciting,” Dreyer told the News-Review. “Because now that my position is voting, I cannot only express the opinion of my peers with words, but now I can represent a high school perspective with the power of a vote. And the possibility of that difference being possible when I heard of this nomination was exhilarating.”

Youth advocate groups have a presence in Lapeer and Lapeer County already, though officials agree the Government for Tomorrow is a different concept than what’s in place now. The Lapeer Youth Council, spearheaded by Commissioner Joshua Atwood and former city commissioner Catherine Bostick, has been around for a couple of years though is struggling to get enough members to have a forum.

YAC was started in 1996 and the membership is comprised of 7th-12th grade students living in Lapeer County. YAC members volunteer their time to assess community needs, study issues important to youth, report their findings to community leaders and evaluate grant proposals requesting funds for youth-oriented programs. The group is also active in the community, completing four or five community service projects annually.

Atwood said while he hasn’t asked for help to conduct the Lapeer Youth Committee meetings, he has welcomed assistance to recruit more students to the group. He said he notified Lapeer Community Schools regarding the youth committee and the opportunity for students to join the group prior to dismissal of the school year.

Lapeer administrators will gather additional information about the Government for Tomorrow organization, that will likely culminate with a future workshop session to further explore the possibility of adopting and implementing such an endeavor with the City of Lapeer. “I think we can’t afford not do to this,” commented Commissioner Tony Stroh.