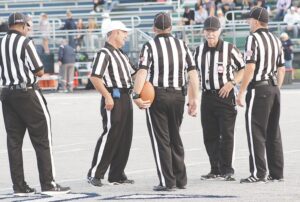 AREAWIDE— Michigan high school football officials have seen a steady decline over the past five years or so, to the point that games are being moved to Thursdays and Saturdays.

“In last year’s COVID year, we lost 30 percent of our officials. I had 62 people who couldn’t work,” said Long, who has been officiating for 50 years.

“Locally, our average age for football officials is 51. In our situation in the area, I feel stronger that the average is 60, with many like me, working in their 70s because they love the game.”

Long said the trend has been to pick up new referees when they are age 18-21. However, once they get married, start careers and move out of the area, Michigan loses them until they reach about 40 years of age and are looking to get back into the game.

The economy also plays a big role. Long said that some have stopped officiating because their day jobs prevent them from being available on football nights due to shift changes. Others, he stated, are simply aging out of the side-job profession.

The increase in 8-man football teams has also had an impact on the officials.

“Something else that has put a lot of pressure on us, schools lose athletes and end up playing 8-man. Most officials want to work Friday night 11-player football” Long explained. “We find ourselves competing for 11-man and 8-man games now.”

When you do the math, you can quickly see how the number of officials needed on any given Friday night pulls from the shallow pool. All four of Phil’s leagues like to use seven officials. Sometimes they have to get by with five or even four.

“The last couple years I have 28 sites that need seven officials and the sub-varsity sites need five,” Long stressed.

“Sportsmanship is another factor that has led to referees opting out of something they love to do.

“Some just aren’t willing to put up with the unsportsmanlike conduct from parents, coaches and players,” Long said. “The level of disrespect we see from all three groups would shock some.”

Long’s main goal is to stop the decline and rebuild the officials pool with new, interested officials. He’s thinking outside the box to make that happen with the new free, online program that is being modeled off something the Tri City Area Officials Association already has.

“It’s a free football referee school, open to not just men, but women, too,” said Long. “I would like to have more people who want to come out and have fun, who have passion for the game, giving back to the kids. Knowing that you are making it possible for the student-athletes to play the game.”

To Long’s last point, no officials, no games.

Long said the traditional path to high school officiating is that current officials recruit their relatives, buddies at work, or neighbors.

“We are trying to reach the people who don’t know officials to get started,” Long said. “The Tri City Area Officials Association has a great program to get people started. We want to get as many people as possible that are interested that just want to learn how to be an official.”

The free program is posted to YouTube every Tuesday and people can learn no matter the time of day. The following Monday there is a live Zoom meeting at 7 p.m. for questions and further discussion. The powerpoints are also posted so the registered participants can review the material over and over.

The program is based on what Long called the three-legged stool – rules, mechanics of officiating, and philosophy of high school football. “It’s fun. We’ve never done it before,” said Long.

This also isn’t just for the Greater Mid-Michigan area. Long said the hope is that the program will help recruit new officials all over the state.

“This is for the state of Michigan, not just locally. We’re going to hook up each new official with the assigner in their area and get them started in officiating,” Long said.

The online program starts Jan. 4, 2022. Each training video is approximately 45 minutes in length and the Zoom sessions will run as long as it takes to answer questions. It’s free and open to anyone. Even the youngest officials who start out officiating the middle school and sub-varsity games are encouraged to take part. Long noted that existing officials can also take part to help answer questions or brush up on the rules and philosophy.

For more information, or to register to get started on Jan. 4, log on to www.assignphillong@yahoo.com.