Almont students get first-hand lesson to learn about pathology 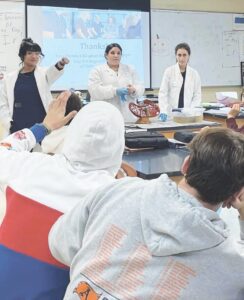 Sixteen first-year Wayne State University Pathologist’s Assistant Program students visited Almont High School on Friday, bringing with them information on the career, the training required and the market outlook for the career path, as well as anatomical specimens. Photo provided

The first-year WSU students shared details about a career as a pathologist’s assistant, highlighting the two paths of the career — forensic or surgical. Approximately 250 AHS students attended the presentations throughout the day. According to Veralucia Mendes-Kramer, director of the WSU Pathologist’s Assistant (PA) Program, it’s an extremely in-demand career that’s appealing to those looking to make a difference in a medical field without the requirement of patient interaction. And there are currently “more jobs than there are PAs,” said Mendes- Kramer, adding that the average salary of the position can reach six figures yearly.

The WSU students also brought visual aids in the form of several real human organs, including a heart and a pair of lungs. While some AHS students were understandably squeamish, many others were fascinated, said AHS teacher Kristin Rohrbeck. The presentations like those offered by the WSU students “open doors (high schoolers) didn’t even know about,” she said. “The students were very engaged.” 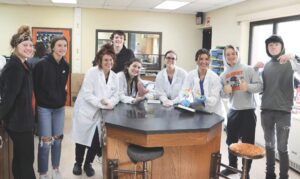 Approximately 250 Almont High School students had the chance Friday to learn first-hand details about a fast-growing career option as a pathologist’s assistant. Photos by Nicholas Pugliese (unless noted)

Rohrbeck said former student Smith was “a big part” in organizing the visit to her old high school.

WSU’s Pathologist’s Assistant Program is one of only 15 such accredited PA training programs nationwide, and the 16 WSU students visiting on Friday represent WSU’s largest cohort in the history of the program. 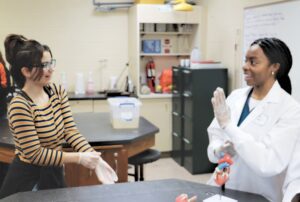